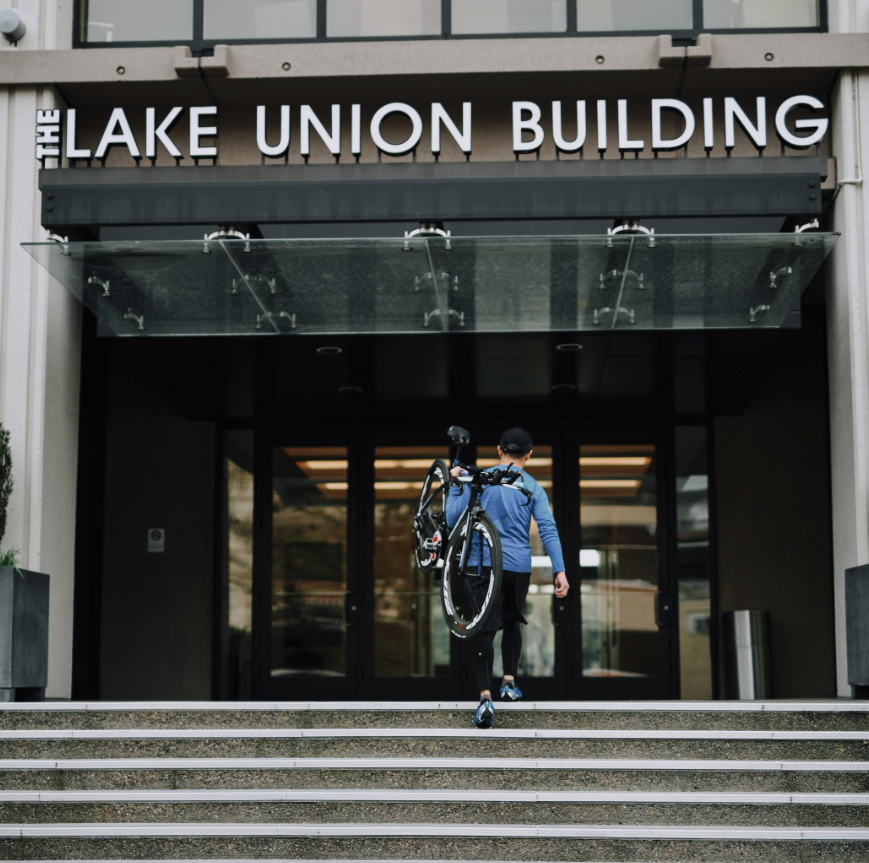 In celebration of Asian American and Pacific Islander Heritage Month, we’re showcasing a number of fantastic AAPI-owned coworking spaces available to book on the LiquidSpace marketplace.

The month of May recognizes the contributions and influence of Asian Americans and Pacific Islander Americans to the history, culture, and achievements of the U.S. At LiquidSpace, we aim to provide a diverse network of coworking spaces on our platform and are committed to celebrating diversity across our business and industry. Take a look at some of the greatest coworking spaces that all tell a different story…

Thinkspace was founded by Peter Chee in 2008, at a time when coworking was still a relatively new concept. It was one of the first coworking spaces in Seattle and the first to be LEED-certified.

When the recession hit six months later, Chee didn’t quit. He doubled down, certain that the community he was building would be more important than ever: “A strong sense of community makes the difference for entrepreneurs and startups to not only survive, but thrive,” he said.

Chee has always been fascinated by the personality of entrepreneurs and enjoys being surrounded by people who do things that have never been done before, which is what inspired him to found the business.

Today, Thinkspace has supported over 600 startups, small businesses, and nonprofits. The coworking space was named PSBJ’s Fastest Growing Companies in 2011, 2012 and was named as Seattle Business Washington’s 100 Best Companies to Work for 2013. Wow, they’re some serious accolades!

Thinkspace aims to create a space that “cultivates entrepreneurs, fosters an environment of success, enlivens senses and provides corporate and community alike to gather for engaging and connective events.” If you have a natural affinity for inspiration and innovation, this is your space. They provide private offices, virtual offices, and meeting rooms in an eco-friendly building.

“It’s the perfect combination of a beautiful space, positive employees and an overall group of people trying to make something amazing happen,” said one of the members, Tyler Roach, Managing Partner at Region 6 Security.

Whatever space you’re after in the Seattle area, book here today. 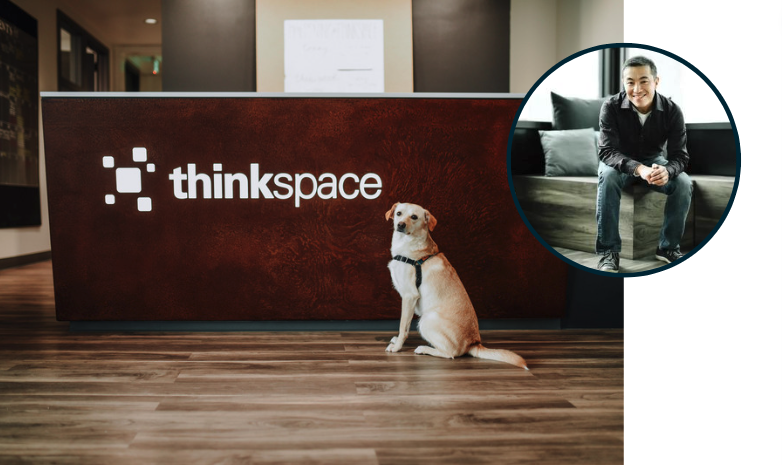 Venture X Five Points in Denver is a modern, flexible coworking space with a close-knit community of like-minded business professionals.

The 14,500 square foot workspace located in the Lydian building was opened by female franchisees Melanie Williams and Kim Corniel in January 2021.

Native Maui, Kim, brings a background in hospitality and event management, including 10 years of coordinating the Sentry TM Tournament of Champions, the PGA Tour's opening event in Maui, and consulting for the Kapalua Wine and Food Festival, the longest running event of its kind in the nation. Alongside her, Melanie, a Denver native, brings an HR leadership background focused in the high-tech and hospitality industries.

The Five Points area in Denver is rich in culture and historical significance known for attracting talent and creativity and has ongoing plans for restoration and revitalization. With boutique hotel-style hospitality, the modern, newly renovated space has specific touches that preserve the look and feel of historic Five Points.

"One of the first things you notice when walking into our space, is the warmth of our lounge, like walking into a cozy jazz club, and the brightly colored, hand-painted, jazz-themed mural on the wall of the Fitzgerald conference room, one of four conference rooms all named for the jazz greats known to visit Five Points in the 1920s and 30s,” said Williams.

"We're excited to join the many other entrepreneurs who are enriching the Five Points community," said Corniel. "Our goal is to create a sense of place that will not only attract other entrepreneurs, but also industry leaders looking to engage the skills and creativity of our local talent. We want to contribute to the efforts already being made to showcase Five Points as a vibrant, thriving community, while embracing the unique culture that makes it so special."

Want to take a look at this beautiful space for yourself? Schedule a tour here. 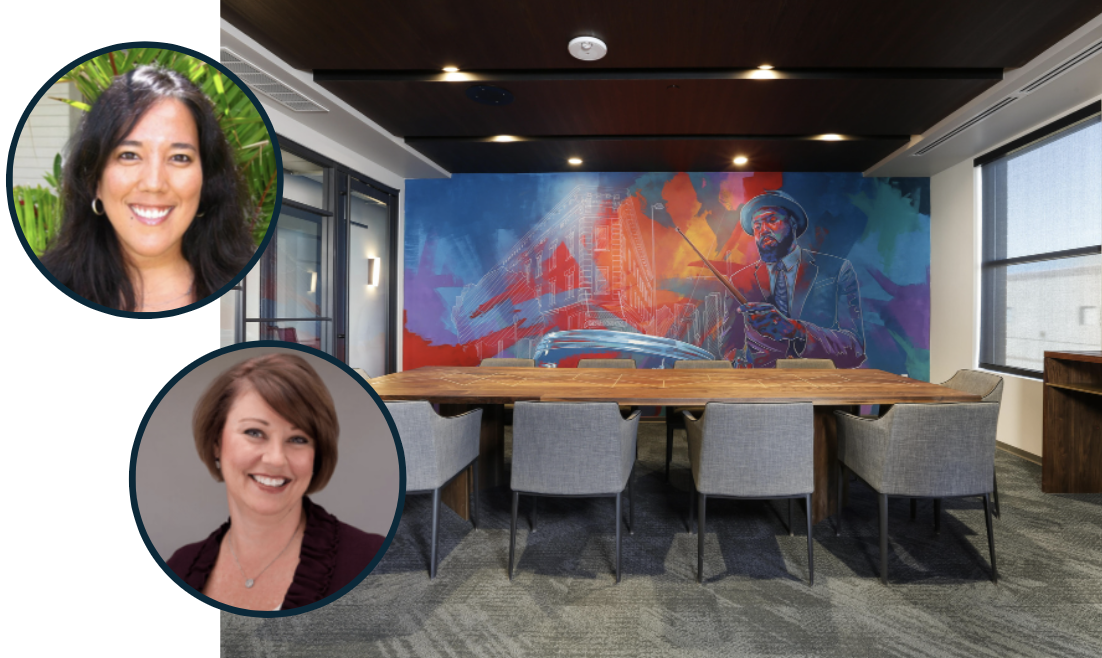 John Lee will be opening Venture X’s newest spot in San Diego in Q1 2023. Immigrating to Los Angeles at the age of 4, John pursued a career on Wall Street spending 21 years in finance. Covid accelerated his plans for a career change, so in early 2021, he and his family made the decision to move back home to Southern California to re-establish their roots and take on a new challenge with Venture X.

Venture X, San Diego is an extensive 121,000 square foot office building with large outdoor gathering areas and walk-out patios from the meeting rooms. Lee has big upcoming plans for this space and we can’t wait to see it come to life.

Look out for this new and exciting coworking space on the LiquidSpace marketplace in early 2023! 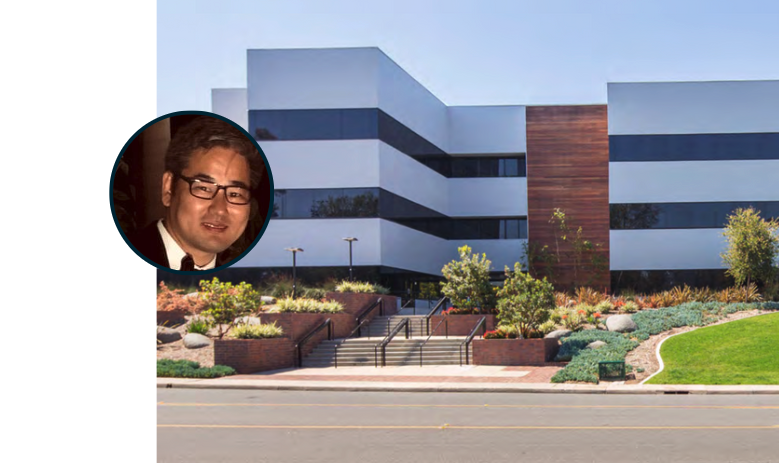 Joshua and his wife, Ashley, own and operate two Office Evolution locations in Illinois (Naperville and Lisle), and they’re having great success.

After spending the last 20 years in the corporate world, with a cybersecurity background, Joshua wanted to venture into a business with his wife Ashley, a piano teacher. They saw the growing need for flexible office space, and the all-inclusive nature of Office Evolution was a perfect choice.

Together, they’ve always wanted to give back to the community and see this as a way of really demonstrating their Asian American heritage and values of respecting and embracing others like family. "We see it as a way to connect with the community and help our members get out of their individual "bubble" and grow with each other,” said Ashley.

But why Naperville? Naperville has been rated “one of the best locations to start a family”. The location is very modern, close to the highway, and has easy access to lots of restaurants, amenities, and a great park. It’s convenient for people that live in the area, and if they have kids, they can see them at the park from the office. A lot of TLC has been put into the space, and it really shows.

The Lisle location is a brand new build-out that opened in 2018. It’s a beautiful, contemporary building with high ceilings and a lot of light. Coworkers also get a free gym membership, access to 50 personal training rooms, all conveniently located just minutes from major highways.

Learn more about their Office Evolution locations in Naperville and Lisle, Illinois on our marketplace. 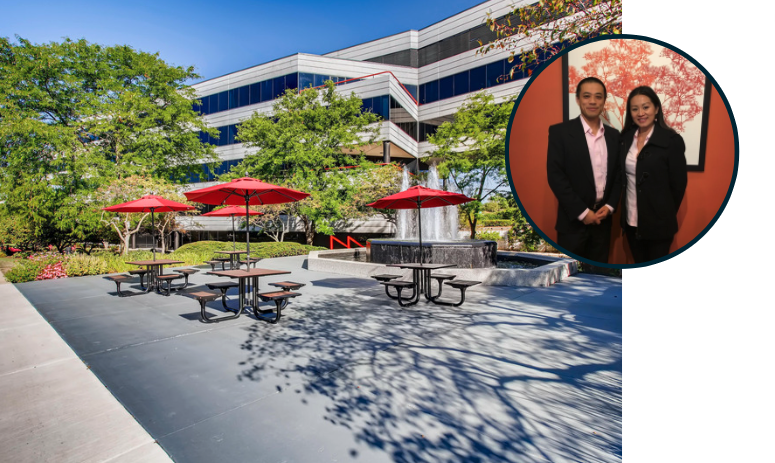 We couldn’t round up this blog without a mention of Jerome Chang, an early pioneer of coworking and the founder of BLANKSPACES.

Jerome co-founded LExC, the League of Extraordinary Coworking (the first national network of coworking spaces) and COSHARE (the first national association of shared spaces), as is a still-practicing licensed architect with a Master of Architecture degree from Harvard University - he’s one impressive guy.

Founded in 2008, BLANKSPACES has been dubbed the original coworking space in SoCal, with spaces all over. The coworking chain prides itself on providing a personal, boutique experience for members to grow their businesses, and being a community for collaboration and networking. The beautiful spaces feature open seating, dedicated desks, private offices, virtual office mail services, meeting rooms, and event spaces available by the hour, day, week, month, or year.

Fancy checking out one of BLANKSPACES 5 SoCal locations? Book a space today. 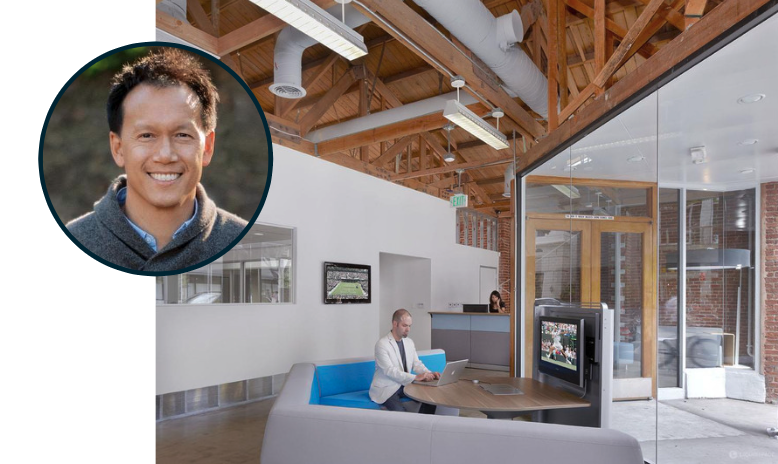 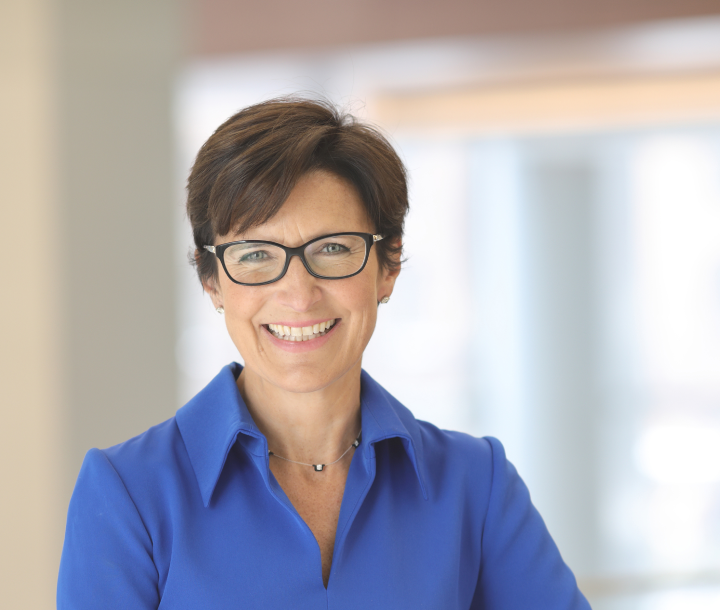 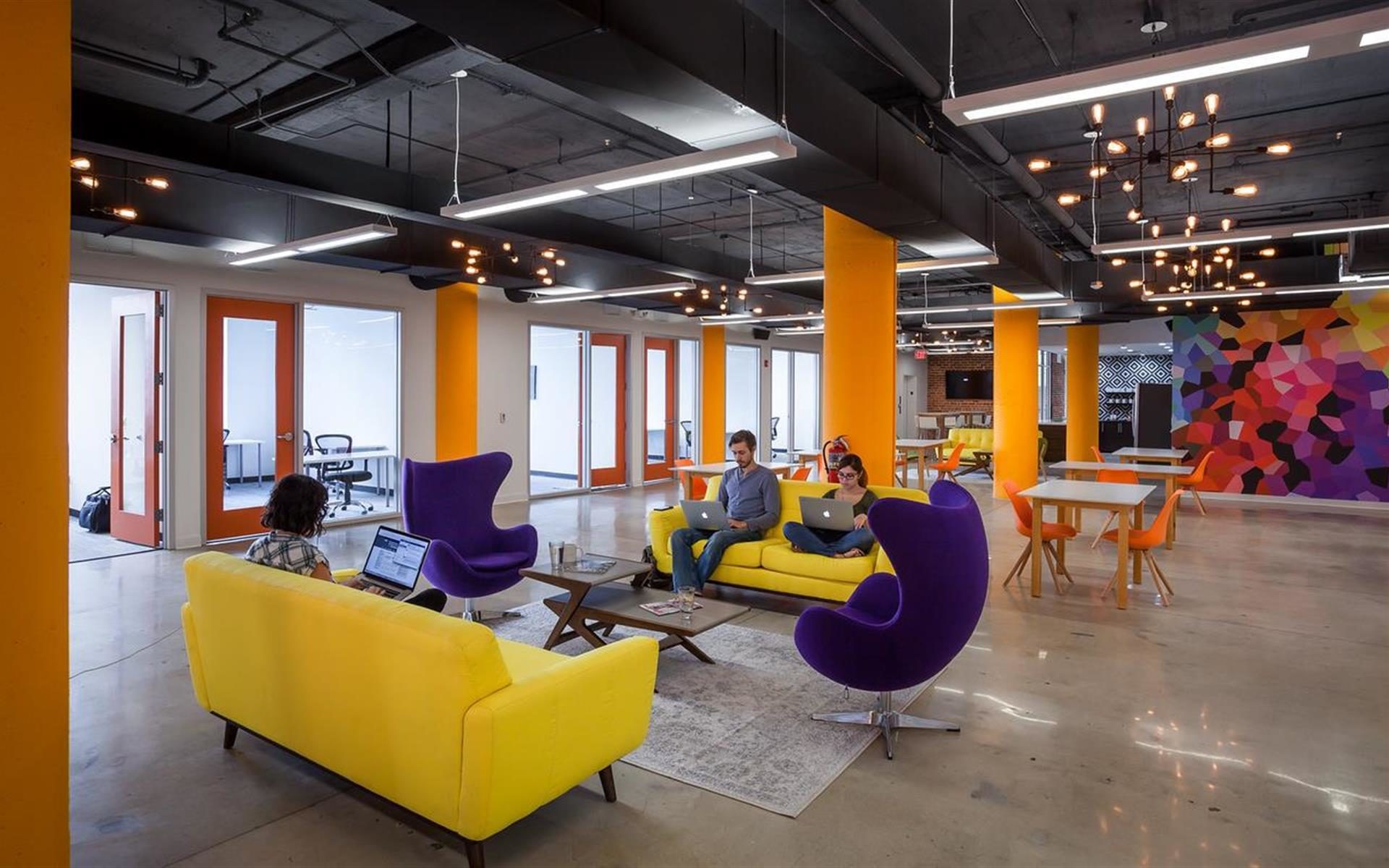